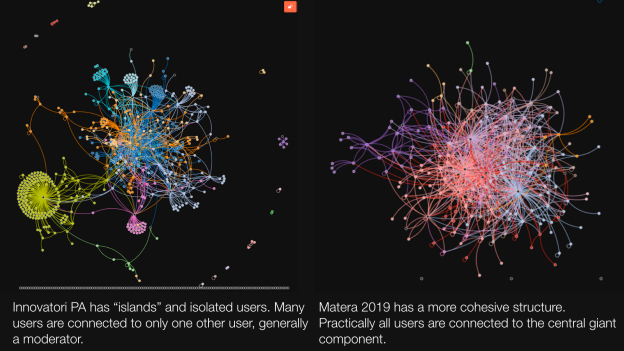 Masters of Networks 3: designing the future of online debate

Back in the day, the emergence of the global Internet was saluted with joy and hope by lovers of democracy. Many activists saw an opportunity for an electronic agora, endowed with always-on operations mode and total recall, that would finally deliver an Athenian-style participatory democracy at the planetary scale, and win power to the collective intelligence of people. It turned out things were not so simple. Online communities have been around for at least 30 years: some of them led interesting, deep debates, and even built amazing things like Wikipedia or OpenStreetMap; others, not so much. A large-scale participatory democracy is very far from being realized.

Masters of Networks 3: communities is an event that tries to learn from the experience of 30 years of online debate. Why is debate fruitful and creative in some contexts, sterile and conflictual in others? Are there reliable tests for a debate’s good health? Can we predict how conversations will evolve? We will tackle these questions starting from a key idea: any conversation, both on- and offline, is a network of interactions across humans, i.e. a social network. In the course of the CATALYST project, Wikitalia and its partners have built Edgesense, a simple software for real-time, interactive network analysis of online communities (video demo – example).

Masters of Networks 3: communities is a two-day hackathon for network scientists, active members of online communities and people interested in participatory democracy to get together, discuss these themes and make sense of what we already know about them. We will visualize and analize the networks of several online communities, using the deep knowledge of its active members and moderators as our guiding star; our goal is figuring out what a “healthy” conversation network looks like, and if we can tell them apart from the networks of “sick” conversations (too conflictual, superficial, polarized etc.).

Masters of Networks 2: communities happens in Rome on 10-11 March 2015. Several scientists, developers and community managers from the CATALYST project will attend, but we have set aside about ten places to allow any interested person to participate. In particular, if you are running an online community and would like to visualize and analyze its interaction network, we can probably help – get in touch and we will see what we can do. Participation is free, but registration is necessary – go here to register. The working language will be English.

I will be there. I think this is a central issue; I tried to argue as much in the video below